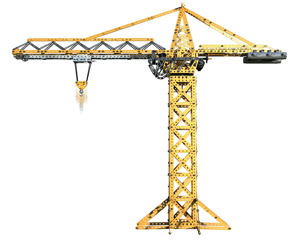 Tower cranes are a special kind of cranes mainly used in construction and industrial units to lift and move materials.

A crane is a type of machine , generally equipped with a hoist rope , wire ropes or chains , and sheaves , that can be used both to lift and lower materials and to move them horizontally. It is mainly used for lifting heavy things and transporting them to other places. The device uses one or more simple machines to create mechanical advantage and thus move loads beyond the normal capability of a human. Cranes are commonly employed in the transport industry for the loading and unloading of freight , in the construction industry for the movement of materials , and in the manufacturing industry for the assembling of heavy equipment.
Cranes exist in an enormous variety of forms , each tailored to a specific use. Sizes range from the smallest jib cranes , used inside workshops , to the tallest tower cranes , used for constructing high buildings. Mini-cranes are also used for constructing high buildings , in order to facilitate constructions by reaching tight spaces. Finally , we can find larger floating cranes , generally used to build oil rigs and salvage sunken ships.
Tower crane
Tower cranes are a modern form of balance crane that consist of the same basic parts. Fixed to the ground on a concrete slab (and sometimes attached to the sides of structures) , tower cranes often give the best combination of height and lifting capacity and are used in the construction of tall buildings. The base is then attached to the mast which gives the crane its height. Further the mast is attached to the slewing unit (gear and motor) that allows the crane to rotate. On top of the slewing unit there are three main parts which are: the long horizontal jib (working arm) , shorter counter-jib , and the operator's cab.

The long horizontal jib is the part of the crane that carries the load. The counter-jib carries a counterweight , usually of concrete blocks , while the jib suspends the load to and from the center of the crane. The crane operator either sits in a cab at the top of the tower or controls the crane by radio remote control from the ground. In the first case the operator's cab is most usually located at the top of the tower attached to the turntable , but can be mounted on the jib , or partway down the tower. The lifting hook is operated by the crane operator using electric motors to manipulate wire rope cables through a system of sheaves. The hook is located on the long horizontal arm to lift the load which also contains its motor.

In order to hook and unhook the loads , the operator usually works in conjunction with a signaller. They are most often in radio contact , and always use hand signals. The rigger or dogger directs the schedule of lifts for the crane , and is responsible for the safety of the rigging and loads.
Components
Tower cranes are used extensively in construction and other industry to hoist and move materials. There are many types of tower cranes. Although they are different in type , the main parts are the same , as follows:
•    Mast: the main supporting tower of the crane. It is made of steel trussed sections that are connected together during installation.
•    Slewing unit: the slewing unit sits at the top of the mast. This is the engine that enables the crane to rotate.
•    Operating cabin: on most tower cranes the operating cabin sits just above the slewing unit. It contains the operating controls , LMI , scale , anemometer , etc.
•    Jib: the jib , or operating arm , extends horizontally from the crane. A "luffing" jib is able to move up and down; a fixed jib has a rolling trolley that runs along the underside to move goods horizontally.
•    Counter jib: holds counterweights , hoist motor , hoist drum and the electronics.
•    Hoist unit: the hoist unit houses the hoist drum , hoist cable , gear box , gear shift , brake , and supporting components.
•    Hook: the hook (or hooks) is used to connect the material to the crane. It is suspended from the hoist rope either at the tip , for luffing jib cranes , or in the hoist rope belly underneath the trolley for hammerhead cranes.
•    Weights: Large concrete counterweights are mounted toward the rear of the counterdeck , to compensate for the weight of the goods lifted.

Assembly
A tower crane is usually assembled by a telescopic jib (mobile) crane of greater reach  and in the case of tower cranes that have risen while constructing very tall skyscrapers , a smaller crane will often be lifted to the roof of the completed tower to dismantle the tower crane afterwards , which may be more difficult than the installation. Tower Cranes can often be Pedestrian Operated by a remote control , removing the need for a cab for the Crane Operator to work from.
Operation
Each model and distinctive style of tower crane has a predetermined lifting chart that can be applied to any radii available depending on its configuration. A tower crane may lift an object of far greater mass closer to its center of rotation than at its maximum radius. An operator manipulates several levers and pedals to control each function of the crane.

Self-Erecting Tower Cranes
Generally a type of pedestrian operated tower crane. Self erecting tower cranes are transported as a single unit and can be assembled by a qualified technician without the assistance of a larger mobile crane. They are bottom slewing cranes that stand on outriggers , have no counter jib , have their counter weights and ballast at the base of the mast , cannot climb themselves , have a reduced capacity to standard tower cranes , and seldom have an Operators Cabin.