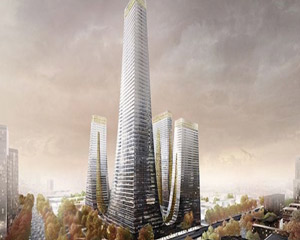 5 tower scheme revealed for Zhengzhou, China, in which the towers will vary in height and emerge from a shared retail podium.

A proposal from London-based architecture firm Tonkin Liu won a competition to design a new trade center in Zhengzhou , China. The project , titled the “Cradle Towers ,” will comprise five towers of varying heights and rise from a shared retail and leisure podium.
The mixed-use towers will form an urban mountainscape and offer residential , office , and hotel accommodations. The retail podium will be hollowed out to form a ring that encircles sheltered , landscape paths and gardens. The ring will also be lifted in areas to allow the inner courtyard to spill out beyond the podium and connect with the city.
Additional vertical courtyards will be created at the base of the towers to bring daylight into the buildings and vertical gardens will creep up the buildings’ facades , which will be covered in fritted glass. Each of the five towers will have a rooftop glass house that screens the mechanical plant floors while also adding an element of greenery to the skyline.

If you are feeling a bit of déjà vu while looking at this project , you aren’t alone. Tonkin Liu’s design bears a striking resemblance to Santiago Calatrava’s recently revealed Greenwich Peninsula. Each design has multiple tapering towers rising from a shared podium. However , the Greenwich Peninsula design has fewer towers , three compared to five , that are all a uniform height.
A construction date for Cradle Towers has yet to be determined.